The Sound of Sugar....Natalia Treviño

Tortilla Skins
In the hot light of your kitchen, ‘Uelita, you showed me how to
press the thick dough against your popping, aluminum table. Your
hands the size of the tortillas to come, willing the mass to open
as soft disk. My hands too small to maneuver, to stretch over it,
to pull the dry powder in. I was fifteen and knew you were happy.
Years after ‘Buelito had died, you a new kind of woman. Certain eyes.
Laughing, traveling, playing cards. Able to wake and say no, to skip
the heat of the day to cook the midday meal. Bake a cake instead, at
night. Crochet and smoke at the same time. Speak up around men.
Accept a small glass of beer. The dough as cool as your hands, your
red fingernails disappearing into the ball. Would you remarry? I
ask. You are quick to answer. Yes, it is ugly to live alone. Your fingers
have memorized this motion, this touch. All I can think is how the
wives in Mexico flail in sick waters, in tired, wakeful oceans, choppy
white crests salting their faces, silenced and gasping by the slap of
spray. Romantic novella endings kneaded into the eyes and ears of
daughters, spiteful neighborhood chisme, the sealing orders from
men, sons, brothers, husbands. The lines on your face, Uelita, deep
like the folds of the dough in your hands. The portraits in your
living room, bridal framed faces, faint as shells at the end of flat
beach, stripped of color by the brine of dry sunlight, waiting for
the tide to soak them, turn them, or swallow them. Bone exposed at the
back of the neck, you bend to your yes. And we press our tortilla
skins to the heat, their faces down, to cook them.
About the Poet:
Born in Mexico City, Natalia grew up in Texas where her mother taught her Spanish and Bert and Ernie gave her lessons in English. Natalia has won several awards for her poetry and fiction including the 2004 Alfredo Moral de Cisneros Award, the 2008 Dorothy Sargent Rosenberg Poetry Prize and the 2012 Literary Award from the Artist Foundation of San Antonio. Currently, Natalia is an assistant professor of English at Northwest Vista College where she works with students of all levels.
About the Sound of Sugar:
We’ve loved reading the work that we’ve published (clearly), so now we want an opportunity to better hear our contributors. We will feature an audio recording of a poem from one of our seven issues, read by the poet and updated every couple of weeks. This an open invitation to all contributors from any of our issues, we were delighted to print your work, now we’re eager to hear it.
Posted by Sugar House Review at 9:03 AM No comments: 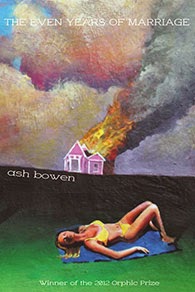 The Even Years of Marriage by Ash Bowen
(Dream Horse Press, 2014)

Ash Bowen’s debut collection, The Even Years of Marriage (winner of the 2012 Orphic Book Prize), charts the dissolution of relationships just as it charts the disillusionment of the speakers in these finely wrought, tightly woven poems.

Every sound is intimately intended for another, the harmony almost at odds with the disconnected characters who weakly try to solder relationships, as in “Mexico’s Waters Are Only for Newlyweds,” from which the title comes:

we’ve charged to our credit card: penance
of the easiest order […]
[ . . . ] Twenty years of marriage—
my lust’s no longer monstrous, your sarong has little left
to hide.
These sonnets, villanelles, and nonce forms are dense thickets of iambic sound, like pomegranate seeds of rhythm that convey anxiety for the loose, unruly lives described. The structures and strictures of these poems are arbitrary rules to anchor the unsettled worlds of their characters—characters who can’t depend on marriage or parents or siblings to steady them.
The book proceeds in three sections: the first details the unraveling of the speaker’s marriage; the second and third branch out and back to the speaker’s parents’ unsteady marriage and stories of the sister’s sexual misadventures and other menacing episodes. All of it is built through metaphors of space, physics, and 50s sci-fi movies, as if those were all systems of arbitrary rules, too, and could keep the chaos from overwhelming reality.
Bowen wields an array of tricks to create pauses, lacunae in which one can ponder, reconsider, recalculate. He employs white space particularly well to this effect, a fitting technique in a book so fraught with issues of separation and divorce:
stars collapsed
through the atmosphere
They threw their light between us
as I made a wish for you
to love me and you did
not.
A sense of nostalgia pervades these poems, a struggle to believe in a world where things still work, where the wedding day smiles and expectations last. Bowen draws from metaphors of old, often sci-fi, movies in this regard; movies that can be rerun ad infinitum to continue to show the way things should have been/were in some more fictional, romanticized past. Meanwhile, space gives the poet a metaphor through which to convey the cold distance that inhabits so many of these poems of failed marriage and failed attempts to have children that result in disillusioned reevaluations of other relationships. While the space metaphors provide fertile ground for illuminating topics of distance and ache, they also register a note of larger universality:
The night you went away
the interstate glowed red beneath the flaring
fins of your father’s Cadillac.
Now this collect call
from outer space & what you’ve called to say
is clear at last: Among stars
lovers come and go easy as you please. It’s the gravity
of earth that makes letting go so hard.
The idiom “to be expecting” doesn’t appear in this book, but a motif of unrealized expectations does, and often it is overtly in the form of trying to have children, the mechanized drudgery of working to get pregnant:
You, from whom
all paternity proceeds, it’s on nights like these
I try to hide, creep farther across the beams
whenever she calls for me.  God,
how I fear the grisly machinery inside of her—
blood in the spokes, miswelded DNA, another
month of trying.
There’s a more sinister, even monstrous, quality to the poems in the second section, poems that portray the females in the narrator’s life as whorish, abused, hurt:
Once my sister
did pirouettes through the city park
saying, I’m a leaf blown by a twister.
Four years later, she boarded a train
with a man who turned her head
six times against the edge of a knife.
Ultimately, this section positions the speaker as an inheritor cursed with an inability to escape the failed relationships of his family’s past, as well as the inherent separateness of his species. In a way, the speaker becomes his jealous father. These poems are creepy yet engaging: morbid, menacing, corset-like. These are characters in jeopardy surrounded by a society that loves the gory details of their sordid stories. And it would be easy to write these poems as judgments, but that’s not what happens; Bowen is skilled at switching points of view, and adapts well to new characters, creating pathos, wisdom, and universality, even when adapting the first person. These often come across as poems of invasion, as in these lines from ‘Stork:’
Tonight I am looking for you
to reclaim your fine down, to break
the windows of sleeping men
hoarding your plumes in their pillows.
Your ghost is circling the city. I am
looking for you like an expectant falconer,
my arm raised against the sky.
Admittedly, the poems sometimes are too honed in on one conceit without enough discursion, diversion or surprise for a reader of contemporary poetry that has so exploded with the cult of surprise. But there’s something nostalgic and comforting in the very way Bowen’s rhythms carry the reader back, soothe the reader with songs even as they recount such haunting stories.
In the end, this is a fine debut, one that welds sound and story into a moment that examines anxieties about our ability and inability, to be together, to damage each other, to keep going while constantly looking back. It’s a smooth read that offers pleasure on the level of each poem as well as pleasure on the level of following characters through dark, narrative tunnels. It deserves reading and listening as it connects to its readers in an abstract salve against its own anxieties.
Posted by Sugar House Review at 1:58 PM No comments: