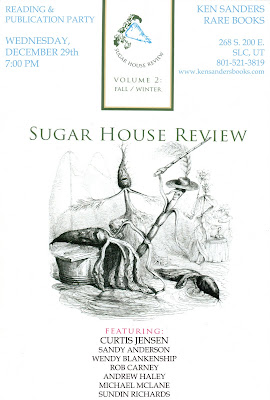 To celebrate the release of our new issue, Ken Sanders Rare Books is hosting a reading with some of our local contributors on Wednesday, December 29th at 7:00 p.m. (268 South 200 East, Salt Lake City). Readers include Curtis Jensen, Sandy Anderson, Rob Carney, Andrew Haley, Sundin Richards, and Michael McLane. Copies of the newest issue and back issues will be available.

Curtis Jensen is an MFA candidate in the Creative Writing Program at Brooklyn College. His work is forthcoming in The Equalizer and The Bridge. He is the author of five chapbooks, and he co-curates the Prospect literary series. Previous to Brooklyn, he has lived and worked in Utah, Wyoming and Ukraine. He maintains a blog at http://theendofwaste.blogspot.com.

Sandy Anderson has been involved in organizing and giving poetry readings and workshops since 1965. She was a founding member of Salt Lake Younger Poets in the 1960’s, Word Affair in the 70’s and she worked for nearly two decades as the guiding force behind the City Art Poetry Series, for which she has been honored for her tireless efforts on behalf of other writers by the City of Salt Lake and Park City’s Writers at Work Series. She is the author of two books – Jeanne Was Once a Player of Pianos and At the Edge in White Robes.

Rob Carney is the author of Weather Report (Somondoco Press, 2006) and Boasts, Toasts, and Ghosts (Pinyon Press, 2003), both winners of the Utah Book Award for Poetry—and two chapbooks: New Fables, Old Songs and This Is One Sexy Planet. His newest book, Story Problems, is out this fall (Somondoco Press, 2010). His work has been published in dozens of journals and in Flash Fiction Forward (W.W. Norton, 2006).

Michael McLane completed an MFA in Creative Writing at Colorado State University. His work has appeared or is forthcoming in Denver Quarterly, The Laurel Review, Interim, Colorado Review, and Sugar House Review, among others. He is a minister, loves Western history, and has a permanent 5 o’clock shadow.