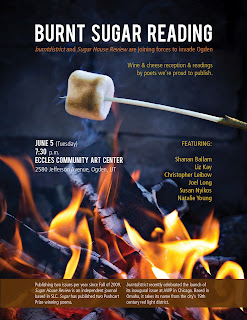 We're really excited to be doing our first joint reading--it's especially exciting to be doing it with burntdistrict, who is normally too far away. burntdistrict recently celebrated the launch of
its inaugural issue at AWP in Chicago. Based in Omaha, it takes its name from the city’s 19th century red light district.

Contributors from both magazines will read:


Wine, cheese, and sugar reception to follow the reading.
Posted by Sugar House Review at 6:33 AM No comments: 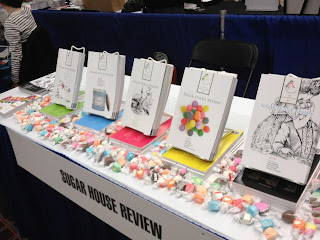 It's been a full year for Sugar so far. AWP was insane and great; we met a lot of contributors and subscribers, which is always nice. We sold out of our the Fall/Winter 2011 issue (at least what we brought with us), which is also nice. 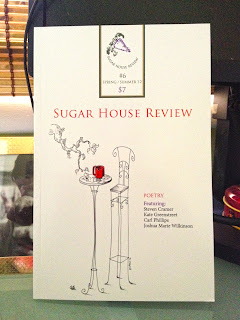 In the past month we launched our 6th issue, Spring/Summer 2012, and while it took longer than planned to get it ready, it was worth the extra time. Contributor and subscriber copies finally shipped this week. We're proud of this issue, so if you're not a subscriber, you should find out how to get your hands on one. 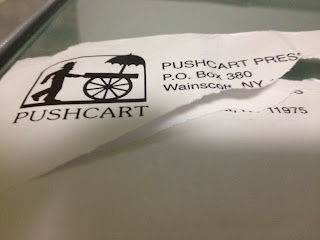 To sum this up, we are overwhelmed by the good things Sugar's been able to be a part of in the first part of 2012 (and the two years previous). Our next issue will mark three years (!). For the four of us who founded the magazine (Natalie, Nathaniel, Jerry and John), it seems pretty crazy. This endeavor is a lot more work than we anticipated, but it's also has much bigger rewards than we expected. Thanks for supporting us. We couldn't do it without you--subscribers, contributors, volunteers, submitters, event attenders, candy eaters, etc.

We have yet to figure out how to be good blog keepers, but we're hoping someday soon, we'll get it better at it. Thanks for being patient.
Posted by Sugar House Review at 1:56 PM No comments: 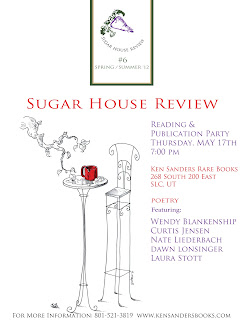 Help us launch our 6th issue--Spring/Summer 2012. Come for an amazing reading featuring current and past contributors:

More info on our Events page (see tab at top of page).
Posted by Sugar House Review at 3:16 PM No comments: