A capella Zoo: another journal you should check out. 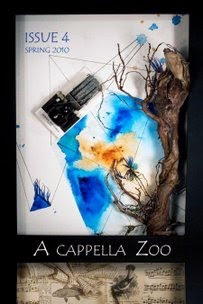 If you haven't seen A capella Zoo, you should check it out. Colin Meldrum and staff are doing a superb job of gathering work that fits within the realm of magical realism. Sample content for their new issue (#4) can be found below. Be sure to check out "Two Evenings" by R. Matthew Burke. If'n you dig, subscribe, and support independent publishing!

Posted by Sugar House Review at 3:24 PM No comments: 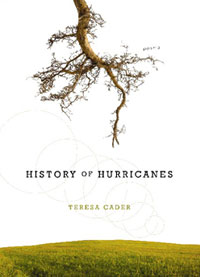 Reviewed by Michael McLane
Early in the first and title poem of Teresa Cader’s third collection of poetry, History of Hurricanes, we are thrown headlong into the conflict that haunts nearly all the poems that follow:

No whirling dervish on the radar, no radar, no brackets
no voices warning—no Voice—fugue of trees, lightning

Because we cannot know, we imagine

What will happen to me without you?

That final question, posed within the context of the impending hurricane season, opens the door to countless other impendings—seasonal change, aging, children growing and, of course, death—and places the poems in History of Hurricanes securely within the lyrical realm and, more specifically, in the long tradition of the early Latin and Anglo-Saxon ubi sunt form. The ubi sunt relies upon the question “where are those that came before us” and Cader not only poses this question in various ways throughout the text, but attempts to answer it in ways that are equally compelling. Much like the hurricane that becomes conspicuous in it absence in the above passage, many examples of the form feature a presence, whether abstract or personified, that looms over its protagonists. What is off the radar or forgotten is what most endangers us. That is not to say these things are repressed in Cader’s poems. Rather, she names them. There is nothing rhetorical to questions posed and nothing sentimental in fears and flaws confessed. This is particularly true in “Blue Table With Pomegranates,” where Cader writes of a table a couple has
decided to give away and concludes:

I know how your hands smooth skin, stroke hair.
That much I allow myself to imagine of your body
Taken from me someday,

Already spoken for by a young couple at the iron gate—

or in “Petrified Light” where, upon seeing a large-scale museum display of a black widow, the speaker admits:

…Whoa, I said to my ordinary. To my stubborn. To fear’s
Onion smell welling up in my armpits. What we have here is a body
Created for me. A creature of wild and deadly desire. Bad.

While both passages contain a powerful confessional element that is poignant in its simplicity and expertly woven into deceptively mundane contexts, what is perhaps most interesting about the two poems, and nearly all the poems in the book, are the contrasts they create, the vacillating between fear of the deaths and losses we are helpless to stop and the pain and traumas we are capable of and culpable for.

The poems in History of Hurricanes are, for the most part, firmly rooted in the domestic. Whether walking the dog, watching birds through a bedroom window, or taking a trip to the museum, family, lovers, children, and home are all thrown perpetually into focus. Even when poems gesture towards seemingly larger historical events or figures is always a result of some more localized trigger, as in “Burying Ground,” where the speaker’s daughter discovers the graves of six children lost during the Revolutionary War including a boy just under 3 years old:

She asked, “What does ‘wanting 8 days mean’?”
Eyes wide: “What happened to them?”

War in Lexington. Fear. Near starvation.
In eighteen days the deaths of six children.

Disease. Epidemics. “Could be smallpox,” I said
“Don’t worry it’s been eradicated.”

She wasn’t worried. Summer’s rebound
beckoned for another bike ride into town.

But I went back to read the stones more closely.

Cader’s speaker, like any parent who has not lost a child, finds herself in the disorienting position of explaining away the fear to her own child while internalizing the tragic potential of a world that had been so average only moments before. The presence of death is realized in a far more concrete way later in the book in the poem “Habits”, which stands out both as the longest poem in the book and, in many ways, as its climax. Cader writes of dealing with both her mother’s death from what is presumably lung cancer, and her ashes which the family plans to use to fertilize a memorial tree:

I cannot watch again. I will not water the pitted

ground with my prayers, or spend nights in the garden
singing to the god of drought. Have you watched a tree die?
Pathetic fisted leaves, cocoons like burial shrouds.

How much should I save, one pound, or two?

What is so stunning about Cader’s poems is how much mileage she gets from absence, how much she does with so little. Like the hurricane alluded to in the first poem, these poems are all quiet nods to the inevitable, to moments we can neither predict nor prepare for. The poems are mostly short and even the longer poems are surprisingly stark. There are few grand gestures or metaphors made in the book and few of the poems call attention to themselves in a way that says “Look at me, I’m important, I’m a crux.” Instead, the connections between poems are clear, the conflicts are consistent, the craft impressive in its subtlety. History of Hurricanes reads as a poignant meditation on love and family that, time and time again, is interrupted by moments of doubt, an ode written and rewritten, but like that songbird bringing good news in “Aria” is silenced “by the swift and deafening, a spring downpour.”
Posted by Sugar House Review at 9:55 PM No comments:

Here's a video about Utah's former poet laureate, Ken Brewer. We had three of his poems in our first issue. He was a great poet and great influence on Utah's poetry community.

A Song for Ken Brewer from USU Extension on Vimeo.

Posted by Sugar House Review at 11:46 AM No comments: